Close window to return to hago.org.uk

hago at the 6th Guitar Orchestra Competition of Great Britain 2003

The senior competition was based on the performance of a 15 minute programme of own choice material, and judged by a jury comprising Timothy Walker, Steve Sammut and Thérèse Wassily Saba.

Compère for the day was the delightful and talented Roland Chadwick, who also gave a lunchtime recital.

At the time this page was last updated, IGF no longer seem to run these competitions, but check IGF's website for their current list of events.

hago at the competition

Although hago were given first place by a unanimous jury decision, the jury were at pains to point out that all the orchestras gave an enjoyable and competent programme. We couldn't agree more and we hope that you will take any opportunity you can to hear the other orchestras - we're sure you'll enjoy hearing them as much as we did!

A national Guitar Orchestra Competition somehow doesn't have the pull that international sport does. It was held on the same day as England's match (and victory) against Australia in Rugby, and the national papers tended to concentrate solely on the Rugby...

That's not to say that press coverage was nil, however. As well as a round-up in Classical Guitar Magazine shortly after the competition, the magazine also printed a full two page round-up in February 2005.

Arguably, getting press coverage 15 months after the event is, shall we say, a little tardy. But the magazine attempted to conceal the delay by putting February 2004 on the cover, rather than 2005. Or it may just have been a typo, since our Musical Director appeared throughout the article as Derek Halstead instead of Hasted.

They say that all publicity is good publicity, though this is just a wee bit late. After all, we have a new name, four new players and a new 2005 repertoire since then! 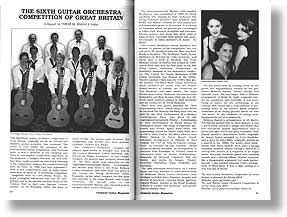 The copyright in this publication is acknowledged and respected. This is why the image cannot be enlarged to become readable. Back issues can be ordered via CGM's website