Welcome to our gallery of photos from 2004 - highlights of just some of the things we've been up to... 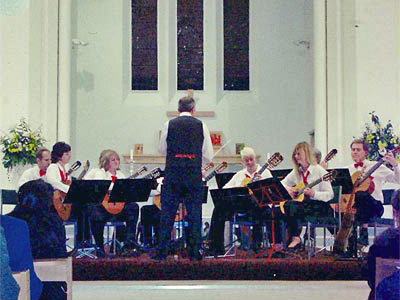 On 8th February, we were invited to take part in the Opening Concert for the 2004 Portsmouth Music Festival at the Church of the Resurrection, Drayton. 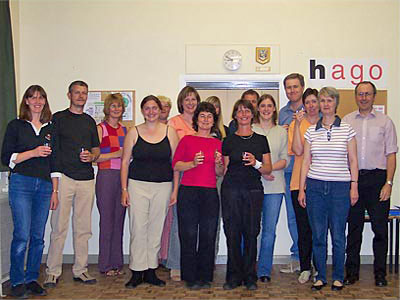 On 10th June, we held our first Open Rehearsal - a chance for local guitarists to come and share music, food and wine.
See more in our Open Rehearsal Gallery. 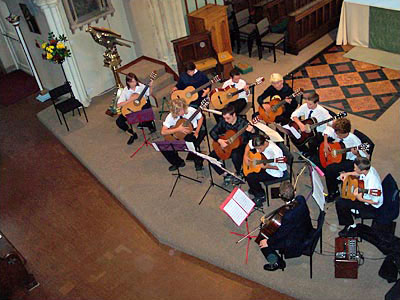 Exactly a month later we held a massive concert in All Saints Church, Portsmouth, with guests Cambridge Guitar Orchestra and Crofton Guitar Ensemble (pictured), who were led by Amber Saunders 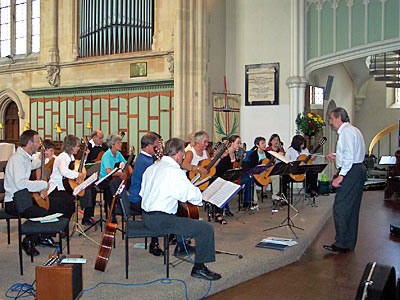 And here's hago warming up...

At the end of July we travelled to Bath Spa University, to the final concert of the IGF Guitar Festival 2004, where we were playing as part of our prize from the 2003 Guitar Orchestra Competition of GB.

Visit our Out-Takes for a different caption to this picture!

Here we are in concert, and yes, the lighting really WAS that bizarre!

On September 23rd, we met at St John's Purbrook to celebrate changing from Havant Area Guitar Orchestra to Hampshire...

A little later in the year, we officially handed over the first of hago's Contra to Rich, our first full-time Contra player

In December, we played at QA Hospital in Cosham in aid of The Rocky Appeal

Another shot of us at Queen Alexandra Hospital

A change in webhosting raised the number of pages served per day, peaking at 787 on Christmas Day!