What's in a name?

On July 6th, at our final rehearsal of the summer season, we voted to make a small adjustment to our name...

Way back in 2000, when we took the name "Havant Area Guitar Orchestra", it summarised in 4 words what we were.

In 2004, we began welcoming players from way outside Havant and we felt that we needed a new name that summarised in 4 words what we were. So we became "Hampshire Area Guitar Orchestra" - a subtle name change that we'd even planned for and hoped might happen, way back in 2000!

As with so many minor tweaks to make things "just so", there are always some flies in ointment and unforeseen side effects.

So we decided to drop the word "Area" on the grounds that it was, actually, all a bit tautological.

4 words in our name, 4 letters in our acronym, 4 sizes of guitar in our orchestra and life is good... 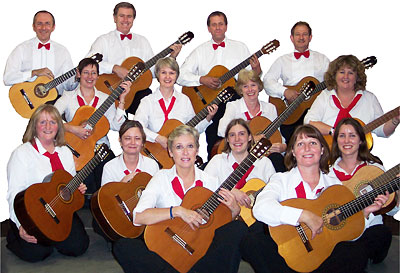 So as from today, we are

But what of our acronym?

Hardly - it doesn't suit us, and we might inadvertantly shower the front row of our concert audience with saliva if we tried to say it out loud!

No, we're still hago, but now the "a" comes from Hampshire we've just made the "h" and the "a" the same colour. Even that has a certain symmetry to it!

Our former venue at St John's Church Hall has been subject to so much disruption, both inside and in the car park, that we're moving our rehearsals to Lovedean Village Hall with immediate effect. We're looking forward to double glazed windows in the winter too!