hago at The Birdman of Bognor

Hampshire Guitar Orchestra at The Birdman of Bognor

It's hard to explain what The Birdman of Bognor is all about, but it's terribly British.

On the one hand, serious contenders try to fly 100 metres from a raised superstructure on the pier, setting off in the 2-hour period around high tide, and aiming for the prize of £25000, as well as the final buoy on the water.

On the other, there's a charity element where people leap off the pier in fancy dress (quite often flightless birds, since you ask!) raising money for good causes as they do so.

The competition, if that is the word, began at neighbouring Selsey, famous for little except houses regularly losing roof tiles in the winter winds, back in 1971. In those days, there was a small prize for anyone reaching 50 yards (45.7 metres), whereas more recently, that distance is beaten handsomely.

Credit where it's due - the initial idea for a fund-raising event was one George Abel, but apparently the burst of British eccentricity needed to mastermind the whole concept was so taxing that George left the country for Australia, presumably on the grounds that one can't leave it much further behind than that.

By 1977, Selsey couldn't cope with the annual invasion of cheerful people and the event was moved to nearby Bognor, which needs all the cheery people it can find. Soon the event was attracting international interest, and more worryingly, international entrants who were winning!

What's it to do with The Hampshire Guitar Orchestra?

We even arranged a version of "Those Magnificent Men in their Flying Machines" specially for the event!

Here are the contact details for the Birdman of Bognor, at the time hago played for them. 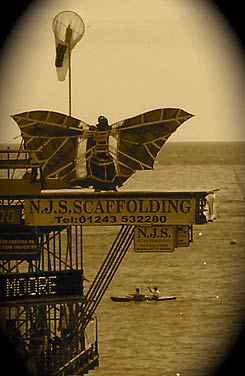