www.hago.org.uk (that's us) was nominated for the Best Special Interest Website. From 133 nominations - the largest of any of the 12 categories - we made it through to the finals alongside www.twyford-organ.com and www.visitandlearn.co.uk. 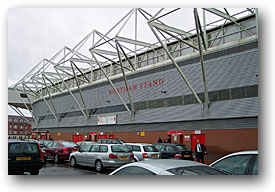 The winner of each category was announced at an Awards Ceremony on March 7th 2006 at Southampton Football Club, which we have to say is considerably more plush and luxurious around the executive side than it is stand-side! The photo on the right shows the John Corbett Lounge where the reception and buffet lunch was held. 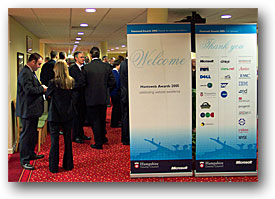 The afternoon was opened by the Head of IT Services at Hampshire Council Council, Jos Creese, who gave a superb introduction to the awards and welcomed Mrs Mary Fagan JP, HM Lord Lieutenant of Hampshire, who formally opened the proceedings.

The 12 categories were introduced by guest presenter Philippa Forrester. Within each category, the three finalists were announced, and their websites projected up on displays. The winner was announced in true Oscars fashion, by opening a sealed envelope containing the result. Jos Creese had already said that he didn't know who the winners were because he wanted to enjoy the same excitement and suspense as the audience. 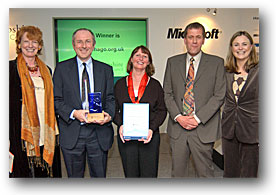 And what a wonderfully varied selection of websites there were. Some categories, such as Best Town or Parish Council Website brought in a selection of similar sites where judging was nonetheless far from easy; our category must have been almost impossible to judge, as the subject matter, presentation and execution were so very different.

Following a quick rundown of the attributes of each of the sites in the Special Interest category, Radio Solent presenter Judy Goodlet opened the envelope and announced the winner as Hampshire Area Guitar Orchestra. 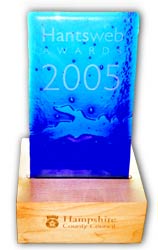 Derek Musical Director, Viv Secretary & Jon Leader were required to adopt a suitable pose for photographs and were presented with a certificate, a trophy and a prize. The trophy, handmade in Hampshire by Tinklertastic, contains fused and slumped glass (whatever that is) on a limewood base, with the coastline of Hampshire within the glass pattern. It is also virtually impossible to photograph! 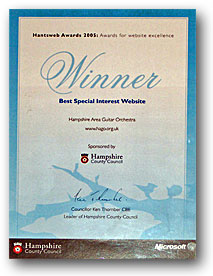 "Hampshire Area Guitar Orchestra brings together amateur and professional guitarists playing four different sizes of guitar. They are one of only a few true guitar orchestras, and they have a unique sound. The Orchestra's website contains an enormous amount of information which leaves the reader with no doubt about who HAGO are and what they do - forthcoming concerts, charity work, workshops, and how to join. Their website is clear and visually attractive, easy to navigate, and includes a wealth of resources, and even a link seeing and hearing them in action."

Our congratulations go to all the other winners and runners up - every website on display was beautifully crafted - it was obvious that many, many hours have been spent making the sites clear, easy to browse and fast to load.