hago and Bruce Paine in pictures

...is one of New Zealand's finest guitarists and it has been a great pleasure to welcome him to the UK and, through his friendship with our Musical Director, Derek Hasted, to share some very special concerts with him.

Bruce is now a close friend of Derek they probably hold the title of the world's most distant duet partners - those 25,000 mile round trips for Derek and Bruce's rehearsals, once every five years sure are tiring...

Bruce brings a compelling mix of skill and expression to the guitar, and his big stature and big heart are matched in his playing with effortless technique and generous phrasing.

Following extensive study and Masterclasses in New Zealand and Australia, Bruce has played with Philharmonic orchestras and performed on New Zealand's TV and radio stations. Having toured in Europe and the UK in 1998, he returned again in 2005 and 2008, with a captivating concert programme that blended familiar and unfamilar works and wrapped them in his very special and expressive playing.

Bruce has recorded a number of CDs which can be ordered from Bruce Paine's Website. Try before you buy, with his downloadable soundclips and hear for yourself his special sound.

If you live in the UK, order online from GuitarCDs, to get your CDs faster!

While you're visiting Bruce's site, check out the gorgeous photos of the scenery round his house in Auckland! Oh yes - and look up his pictures of Thomas Edward Paine and see how it ties in with the Privett photo on our MD's site.

hago and Bruce Paine at Denmead 2008

Bruce and hago at All Saints Denmead

hago were delighted to be hosts for a real once-in-a-lifetime Concert featuring the very special talents and musicianship of New Zealand's most expressive and romantic Classical Guitarist - Bruce Paine, on his second UK visit.
The Concert was at St Agatha's Church, Portsmouth, recently described as one of Portsmouth's hidden architectural gems, with a massive interior, a cathedral-like acoustic and one of the finest decorated apses in the UK.

The concert took place on the day of the dreadful London terrorist atrocities, and the final item - Schindler's List - brought together Bruce and hago. The music, dedicated to those caught up in the awful events earlier that day, was played to a hushed audience.

Bruce opened the concert with a delightful selection of solos, including music from his homeland - Duarte's arrangement of Hine e Hine.
His encore - the well-known and instantly appealing "Recuerdos de la Alhambra" - saw a massive queue in the interval for his latest CD, and the signed copies sold out completely!
You can order a copy at guitarCDs - it's entitled "Guitar@Museum".

Bruce played a Rod Capper guitar that he brought over from New Zealand, and it was a great pleasure to welcome Rod to the concert.

hago viewed from the back of the Church

hago played their new 2005 repertoire, including some new pieces that require you to see us in concert to find out why the audience laugh! 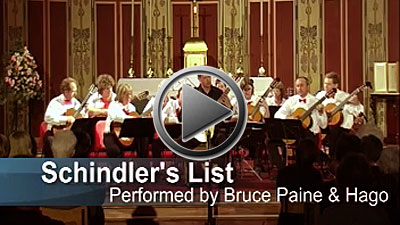 hago and Bruce Paine at the Birdman of Bognor 2005

While Bruce was in the UK, he joined us at the Birdman of Bognor - more photos in our Birdman Gallery 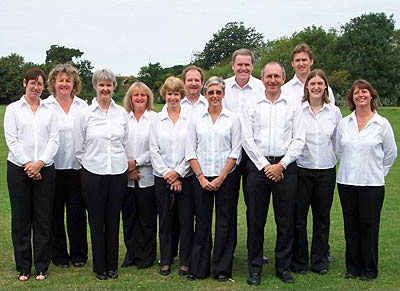 Roll call at the car-park! 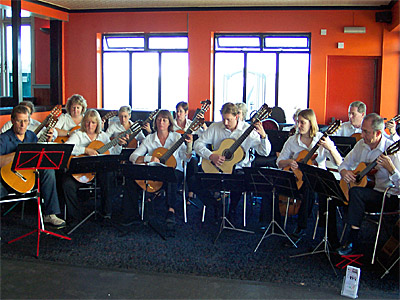 We performed in the rather orange VIP Lounge on the pier