It's become a tradition...

From a hesitant beginning in 2002, this "home and away" concept has evolved into a fantastic weekend, with rehearsals, food, a concert and a massive celebration afterwards. A few "stills" can't do justice to it all, but we've had a go in our album of "serious & silly"

Our relationship goes back a long way - to 1984, when hago's Musical Director, Derek, lost Sandra, one of his best pupils, when she left Havant and set up home close to Cambridge.

Unbeknown to Derek, Sandra moved from being a pupil to a qualified teacher and took a seat in the Cambridge Guitar Orchestra. It was at the West Dean Guitar Festival in 2000 that Sandra and Derek met again and in early 2001, CGO came to Brighton to play, and we realised that joint Concerts were a real possibility.

And that's how our regular forays into each other's "territory" first started...

2013 - at the Church of St Edward King and Martyr Cambridge

Saturday afternoon - is it The Hokey Hokey about to kick off, or is it a group hug?

Realising that the names on the concert programme don't quite match up with the current hago team, Lisa is shot by Colonel Mustard, in the garden, with the pistol. Order is restored.

Is it a bird? Is it a plane?
After the concert we return to the hotel for food and fun.

Caroline gets the spelling wrong and in an unfortunate homage to Frederic Bayco the composer, brings a Bayko toy building set instead.
Graham shows Heather his roof-less, wall-less creation

Just some of the food that vanished during the evening

An unexpected winner in the "First to fall asleep" award was Jenny, gaining bonus points for making her kip look really comfortable too.

CGO Chairman Tony Ainsworth shows off his new bow-tie, chosen with love and affection by hago, deciding that his legendary tea-pot impression will top it off nicely.

This concert, part of the opening concerts of the Portsmouth Festivities, was held in the lovely St George's Church Portsea 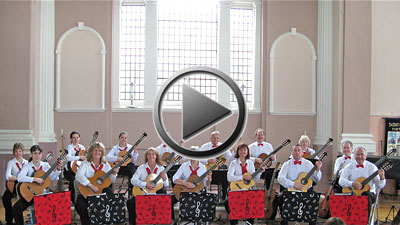 CGO played the second half

Sing Lofty!
...whereas our gift to Peter Rueffer of an elegant Pith Helmet fitted perfectly with our premiere of Whispering Grass, even if the helmet didn't fit perfectly.
Besides it was only fitting to give Peter the pith after years of taking it... 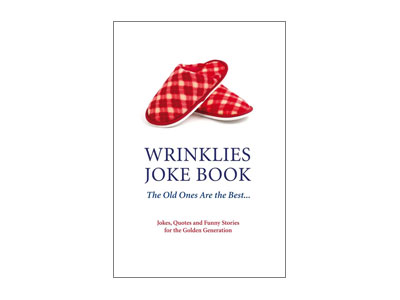 We don't know what made CGO think that this gift, so kindly presented, would make Derek's jokes funnier - they can judge when we meet up in 2013 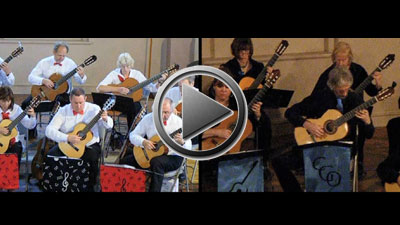 As we bid farewell to our 100th concert and to our good friends CGO, enjoy this little memento - When The Guitar Sings

2011 - at the Church of St Edward King and Martyr Cambridge

Time for a cuppa at the Hotel before the concert

CGO get ready to start

hago played the second half of the concert...

Our gift of appreciation to Peter, CGO's Musical Director, was a pair of silent practice percussion eggs in a Cambridge Blue case - the Peter Pan

After the concert it was back to the hotel for the now-traditional post-concert party...

Here is some of CGO and some of the food...

And some of hago and some more of the food! And a camera...

Winner of the "First person to fall asleep" award was the hot favourite!

This concert, part of the closing concerts of the Portsmouth Festivities, was held in the lovely St George's Church Portsea

Events didn't go to plan when an electricity substation caught fire at 1am and blacked out 47,000 properties.
Gunwharf Quays and its car park remained shut all evening, but the church had power all day.

The woodcarving of St George, over the door to the kitchen

The view from the front of the Gallery

The gallery was pretty packed, and the acoustics up there were sublime

Derek the Chicken became Derek the Duck this year.

Accompanied by the music from The Pink Panther, our MD was presented with a fizzing "berm" as a token of CGO's affection for him...

The aftermath of the concert.
hago will be plotting their revenge...

2009 - at the Church of St Edward King and Martyr Cambridge

High spot of hago's year is our outing to Cambridge and this year's was quite spectacular.
There were three stitch-ups for a start...

Some of the team enjoying the sights before the concert

CGO were rehearsing furiously when we came into the Church

Stitch-up number one - hago's rehearsal lasted 2 minutes - a cold and calculated move to unsettle the hosts and get to the food quicker.
And it worked - CGO were seen to have a SECOND rehearsal in the time we freed up! We were so quick, there was no photo...

Back in the hotel, Peter Rueffer was presented with our efforts. It was much appreciated as you can see from his strained smile...

Avril proudly showed off her new slim and lithe guitar, which has been on the Atkins Diet

Stitch-up number three - CGO's MD hadn't seen what was on the T-shirt when we got him to pose...

Winner of the third hago award for sleeping at the party is Tracy, who lost the will to live just as Mike finished his 30-minute shaggy dog story

This concert, part of the opening celebrations of the Portsmouth Festivities, was held in the lovely St George's Church Portsea

It's no good - we just HAD to eat first!

Here's hago performing in the first half of the concert

Our post-concert party was in the Customs House at Gunwharf

And of course Derek was there...

2007 - at the Church of St Edward King and Martyr Cambridge

Back in the hotel we've apparently over-catered a bit!

Derek with Peter Rueffer, CGO MD, pictured wearing a wig and being the worse for wear all in one go - yes, hago present him with a fetching black rockstar hairdo.

Apparently, anyone who's anybody is wearing a rockstar hairdo this year...
From Cher to Queen Victoria in 4 easy stages...

Later, Derek was nearly given a First Class Stamp before being rescued in the nick of time...

Winner of the second hago award for sleeping at the party is Lisa!
More winners in future years...

In 2006, we returned to the magnificent Church of St Agatha, in central Portsmouth.
Food came first (and what's wrong with that), before an enjoyable concert was taken down a peg or two by the appearance of CGO's new mascot - a furry creature with a large beak which they called Derek. Can't think why. Except that it's very irritating and noisy.

CGO getting ready for their next piece

The post-concert wind-down was at Southsea on a gloriousy balmy evening.

Avril gets confused over which Derek is which and tries to strangle the wrong one.

2005 - at the Church of St Edward King and Martyr Cambridge

We returned to the lovely Church in the very centre of Cambridge for another concert and more food!

Back at the hotel, Avril can't conceal her disappointment

Some of hago decide to try freestyle wrestling...

...while others decide to wear the contents of the Pot Pourri

And it all proves too exciting for words...
Winner of the first hago award for sleeping at the party is Heather!
More winners in future years...

2004 - at All Saints Church Portsmouth

For Cambridge's second visit, we moved to a slightly more modest and less reverberant venue.
We were joined by one of our players' other ensembles, the Crofton Guitar Ensemble.
The tea, between rehearsals and the concert started to set the tradition that food and friendship are the two reasons for our concerts!

hago were on next - we're pictured here rehearsing

And here we see what has become the tradition of a post-rehearsal pre-concert feast, provided by the home team

2003 - at the Church of St Edward King and Martyr Cambridge

Our first visit to Cambridge ended with CGO joining us for our final item - a 35-strong rendition of a fun little piece.

The final item in hago's set was called
Ballo Dell'Impedimento Del Trattore a Cingoli
More about the story of the Ballo here!

hago take a bow at the end of their set

A chance meeting at West Dean between our MD Derek and a former student of his, now playing in CGO, resulted in the first of what has been a remarkable and happy series of joint concerts, in Portsmouth on the even numbered years, and in Cambridge on the odd.

Our first concert, played to an audience of almost 190 people, was in the magnificent St Agatha's Church Portsmouth

Here's our bass section in action - 2 basses and 1 contra guitar.

And CGO returning the volley...